In this part we'll guide you through our process of furnishing the office in the way we thought would be best. Discussions regarding different types of furniture, designs and other decor was of course the first step. When everything was decided, we had two months to buy and get all of the furniture delivered, and that was more or less impossible. Our architect told us that we’d need to hire someone to help us out.

We felt tired of paying people to help us move, as there were new people to pay around every corner. However, hiring people to help out with furniture is certainly something we don’t regret. It’s bloody expensive but also so time consuming.

We worked with a Gothenburg-based company called Input Interiör. They relished the challenge of making this work in two months and took on the project. When I told them about the democratic approach of our company they told us that, while it can be done democratically, decisions would have to be made on a daily basis in order for us to meet the deadline.

Every decision regarding the furniture was based on the designs from our office concept. Input Interiör, along with the architect, proposed various furniture designs and interior suggestions for us to choose from. For example, we had a total of nine different types of artificial grass for the first floor proposed to us before we found the right kind. That process made the furniture guys incredibly stressed. 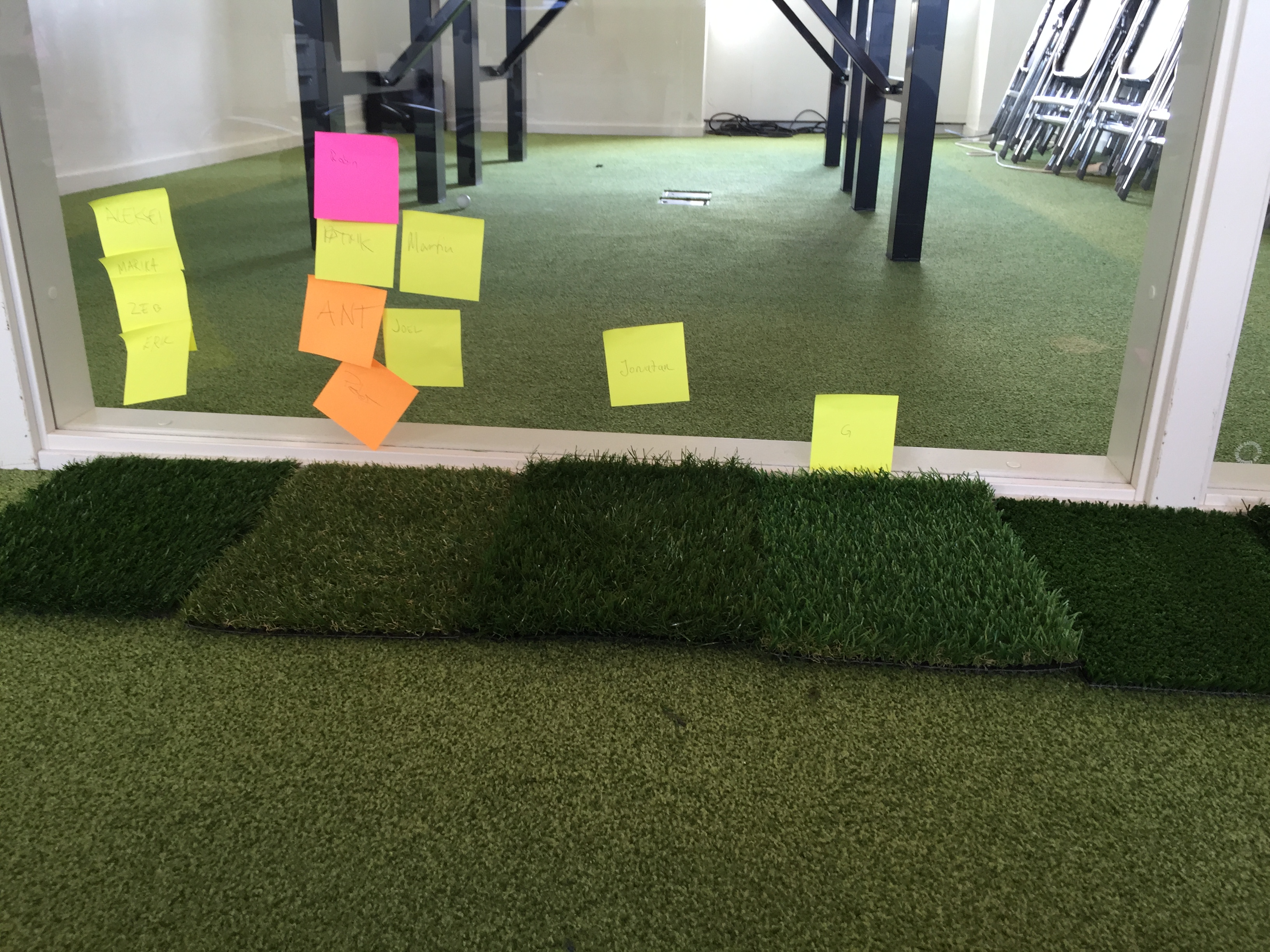 The second option from the left was our favourite.

We used the same way of working when choosing the desks, which were the single piece of furniture the team were most interested in by far, which is quite natural since we use them every day. The architect highlighted some colours that he thought would conflict with the overall design of the office, but apart from that we were free to choose and vote from a wide range of designs and colours of desks. 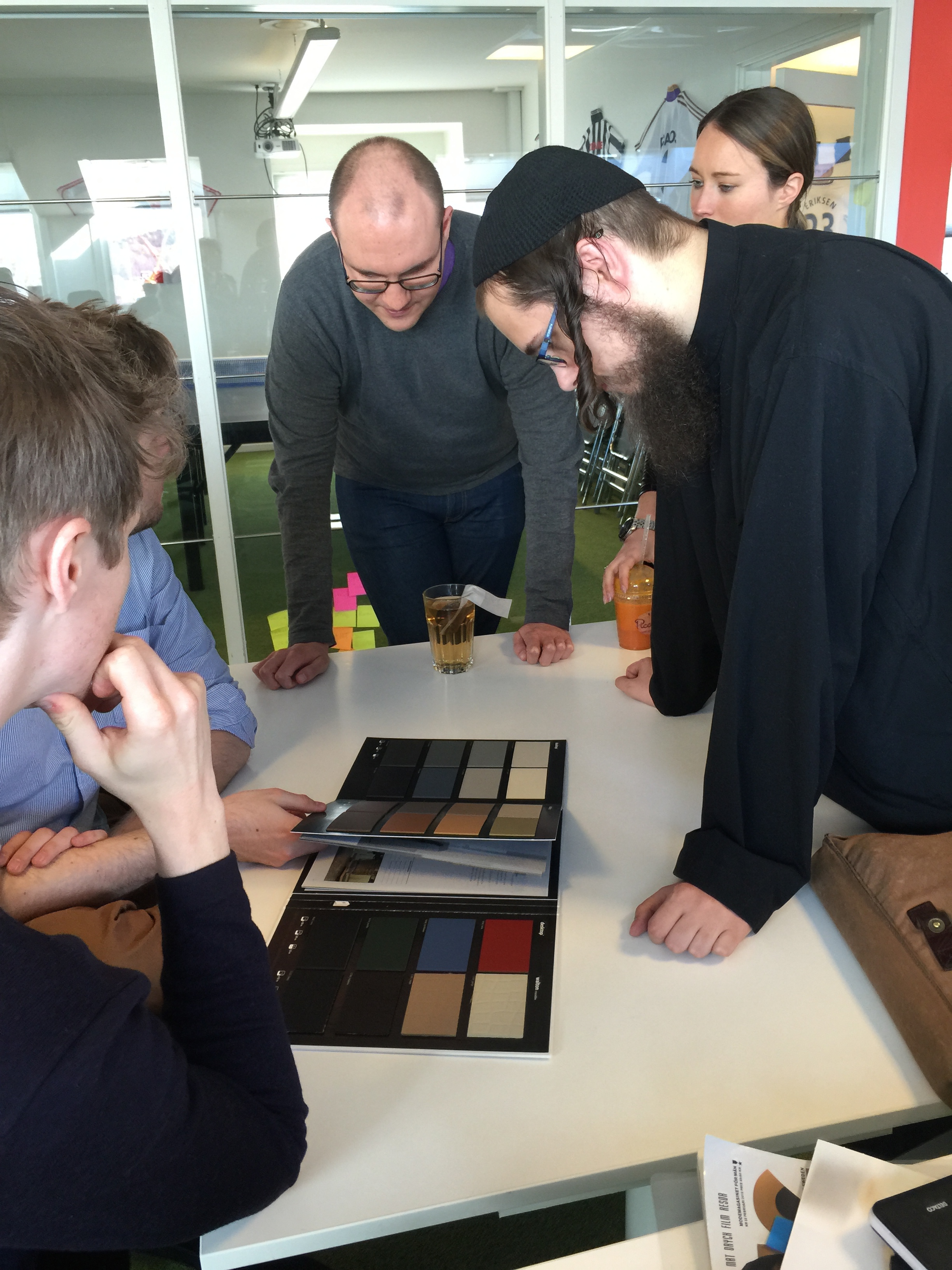 Of course, one of our teams’ biggest concerns was the lack of refrigerator space for our Friday beer sessions! In the previous office the refrigerator often became jammed with beer as the weekend approached, and we managed to solve this problem by making a kitchen-island, with beer refrigerators as the base. Now we can easily store hundreds of beers in the office! 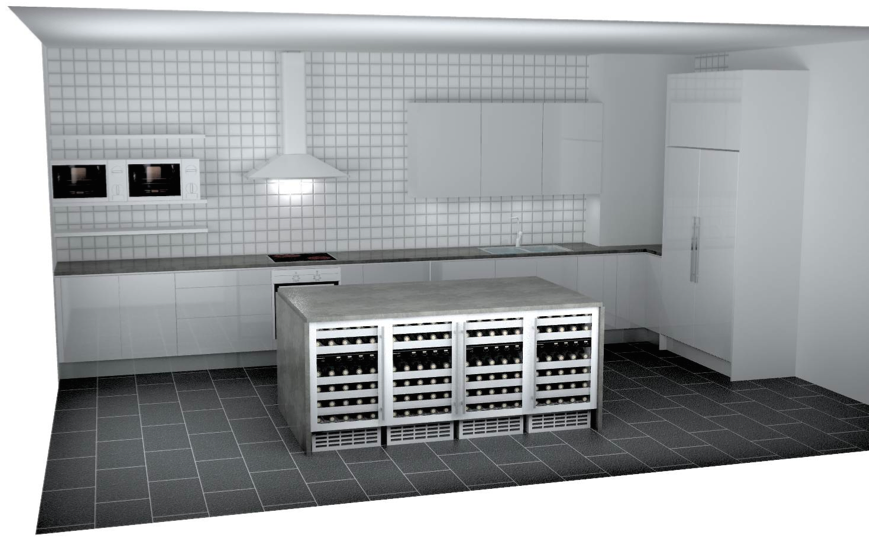 The design for the beer based-kitchen-island.

The limited time meant that it was impossible for everyone to express their opinion on everything. In the end, we were basically forced to compromise and make quick decisions sometimes due to the lack of time, but we tried to involve everyone as much as we possibly could. Because that really is the key to a great workplace.

Besides the furniture that Input had in their range, a few pieces of furniture had to be custom-made by a carpenter. A device table, lockers, flower boxes, the library shelf, the zen room flower box and the wooden terrace for the game room’s seating. The process went like this; the architect showed us some sketches of the furniture for our approval, including the material, and then Input passed it on to a carpenter who started building it. 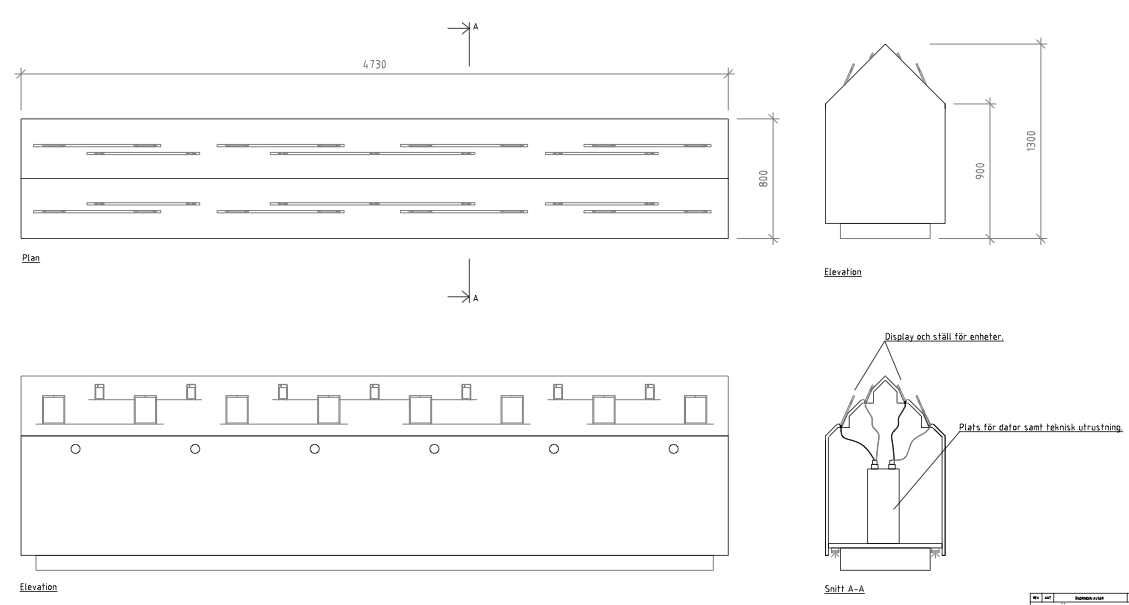 The initial sketches for the device table.

In hindsight, this didn’t work out. The end result did not look like we thought it would, because it’s extremely difficult to evaluate and give feedback based on a sketch of furniture.

Therefore, we decided to build the terrace on site, so the carpenter could show us his ideas right away. That was far more efficient and the end result turned out great. That was a useful lesson for us, and could be valuable in future projects. 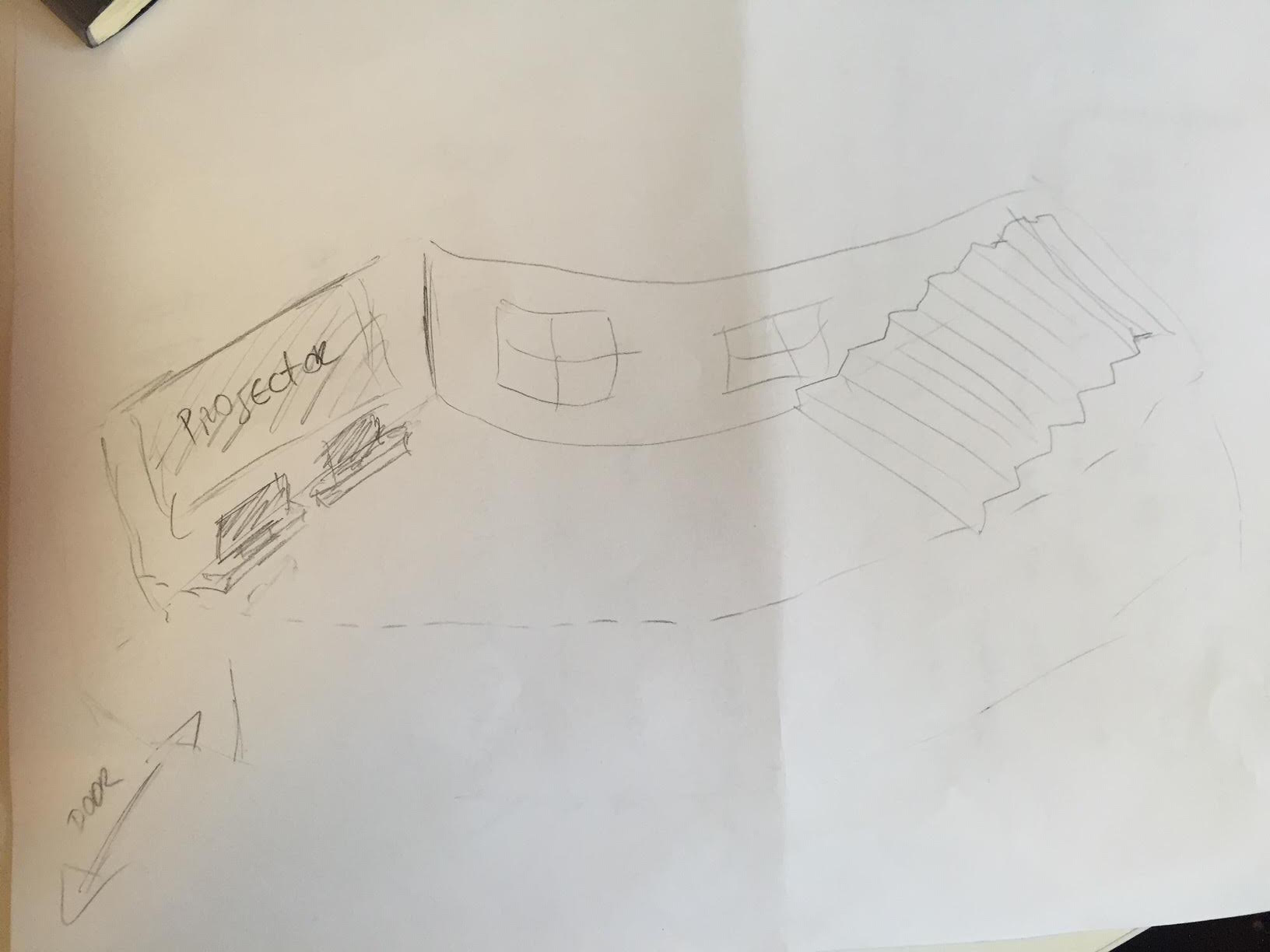 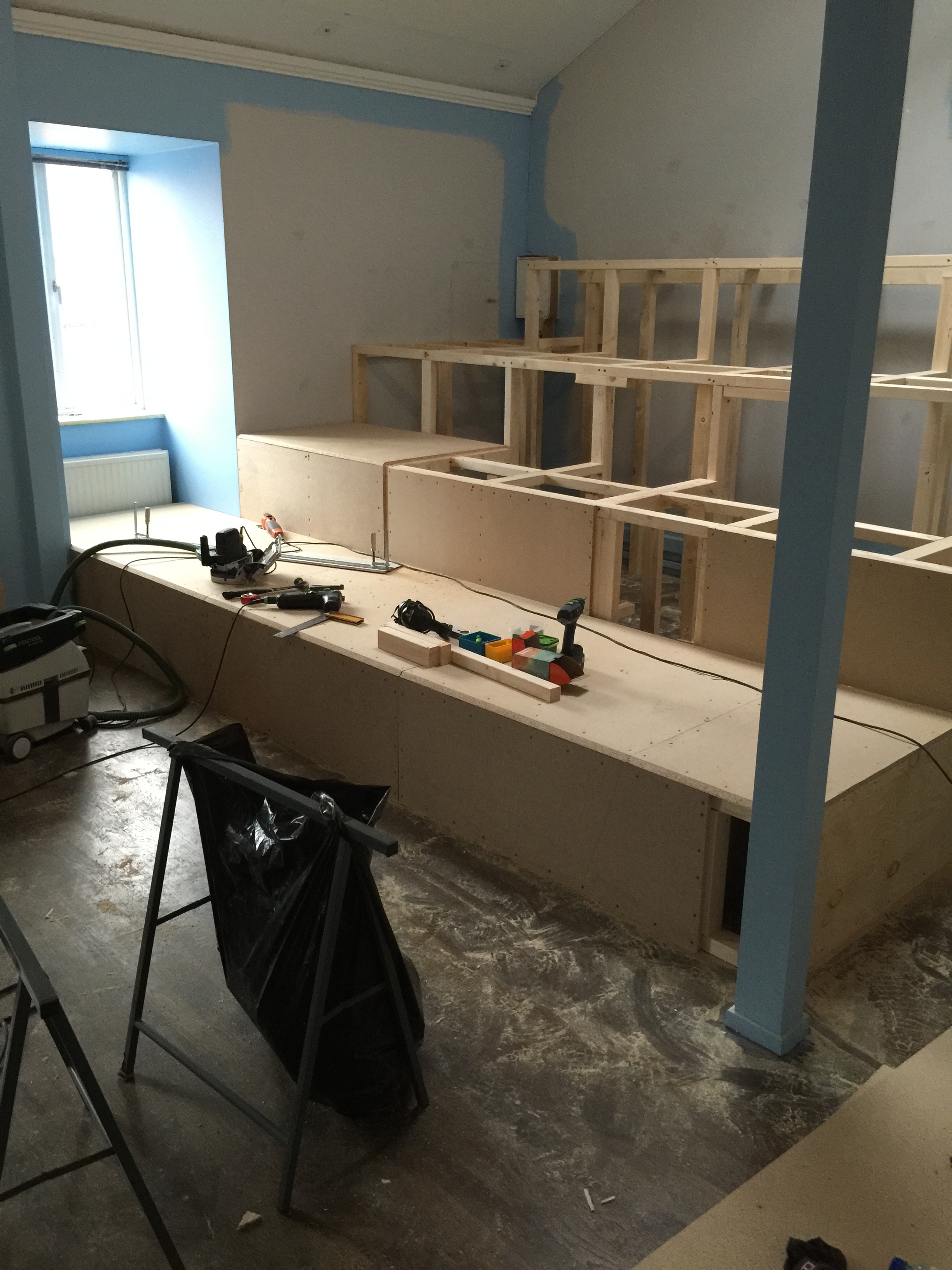 Another big discussion point was the choice of games for the first floor. We already had a ping pong and foosball tables from the old office, but we wanted something more. Luckily, we found a Gothenburg-based company that had created a game called Futchi, which would be awesome to play on the artificial grass on the first floor.

The downside with both Futchi and ping pong is that you really need technical ability in order to play, and we realized that not every employee enjoys these types of games. Therefore, we started to look out for a game everyone could play, and came up with the idea of a Shuffleboard. Some of us hadn’t played it so we arranged a Shuffleboard night to see if people liked the game, which thankfully they did! The shuffleboard was easier to buy than get into the office though… 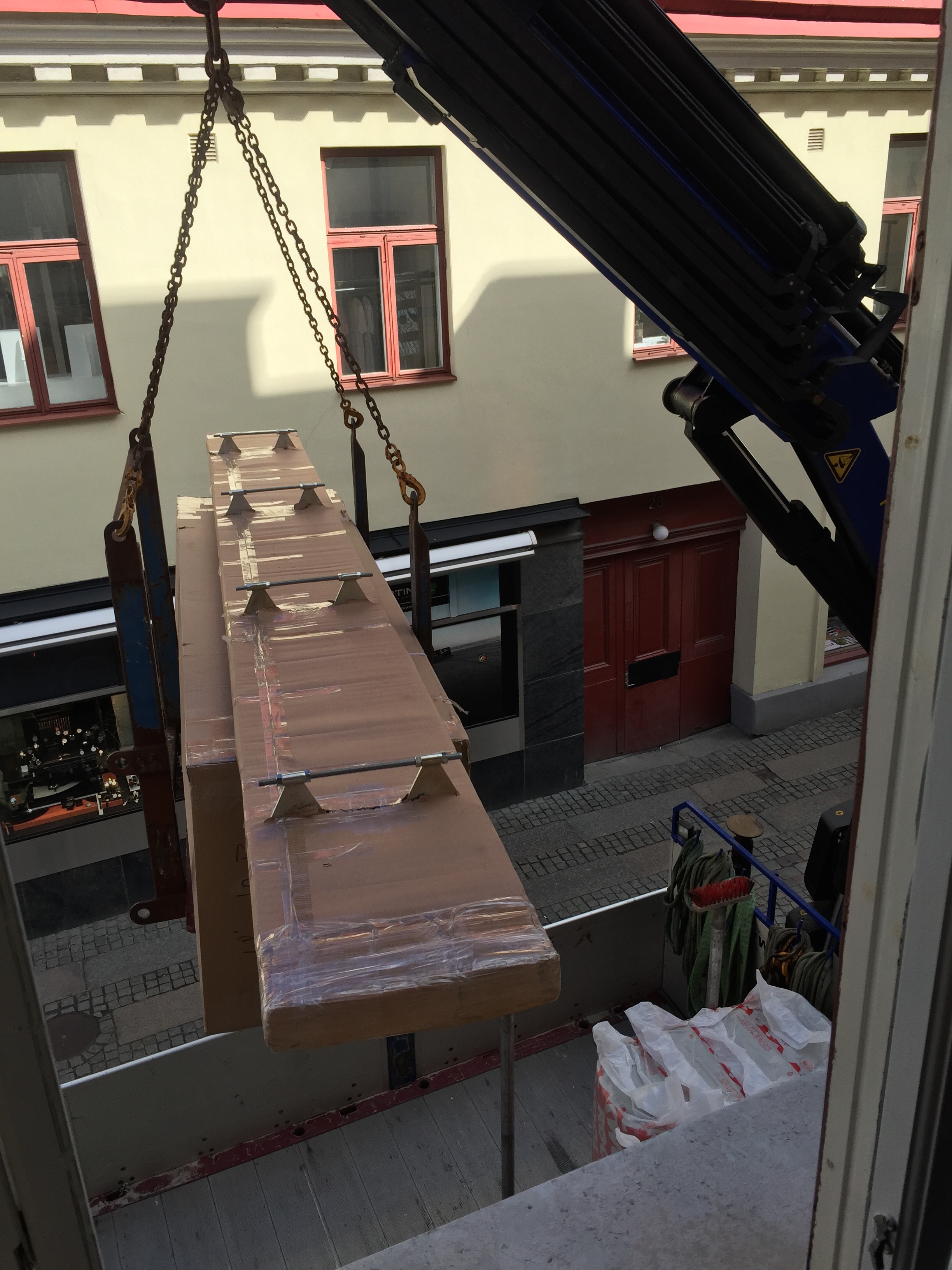 It really was as difficult as it looks!

One of the biggest costs in a new office is electronics. This also requires some knowledge on the subject. Luckily, one of my colleagues, Martin, took responsibility for this and we also hired a specialized firm to help out. Although, it was more expensive than we initially thought. Our whole furnishing budget was at €100k and the first quote for the electronics landed at €40K. I almost puked when I heard it. We had to make compromises and managed to cut the cost to €20k. We settled for the cheaper TVs in the game room, and the “boasting screens” at the entrance that we had planned for were forgotten about. We underestimated the cost of electronics substantially.

During the furnishing of the office, we realized that we would not be able to do everything perfectly from the very beginning. Some questions are impossible to answer right away, and we need to view this as the first version of the office. We decided that if we don’t have a good enough idea, there's no point in pursuing it, because you have to love and be passionate about what you’re doing.

Our stairway to the second floor is a prime example of that. We always wanted to have photographic wallpaper on the stairway walls, but we had no time to come up with a proper design, and so that will be an upcoming project. There will certainly be plenty of time to adjust and come up with new ideas for our new office. 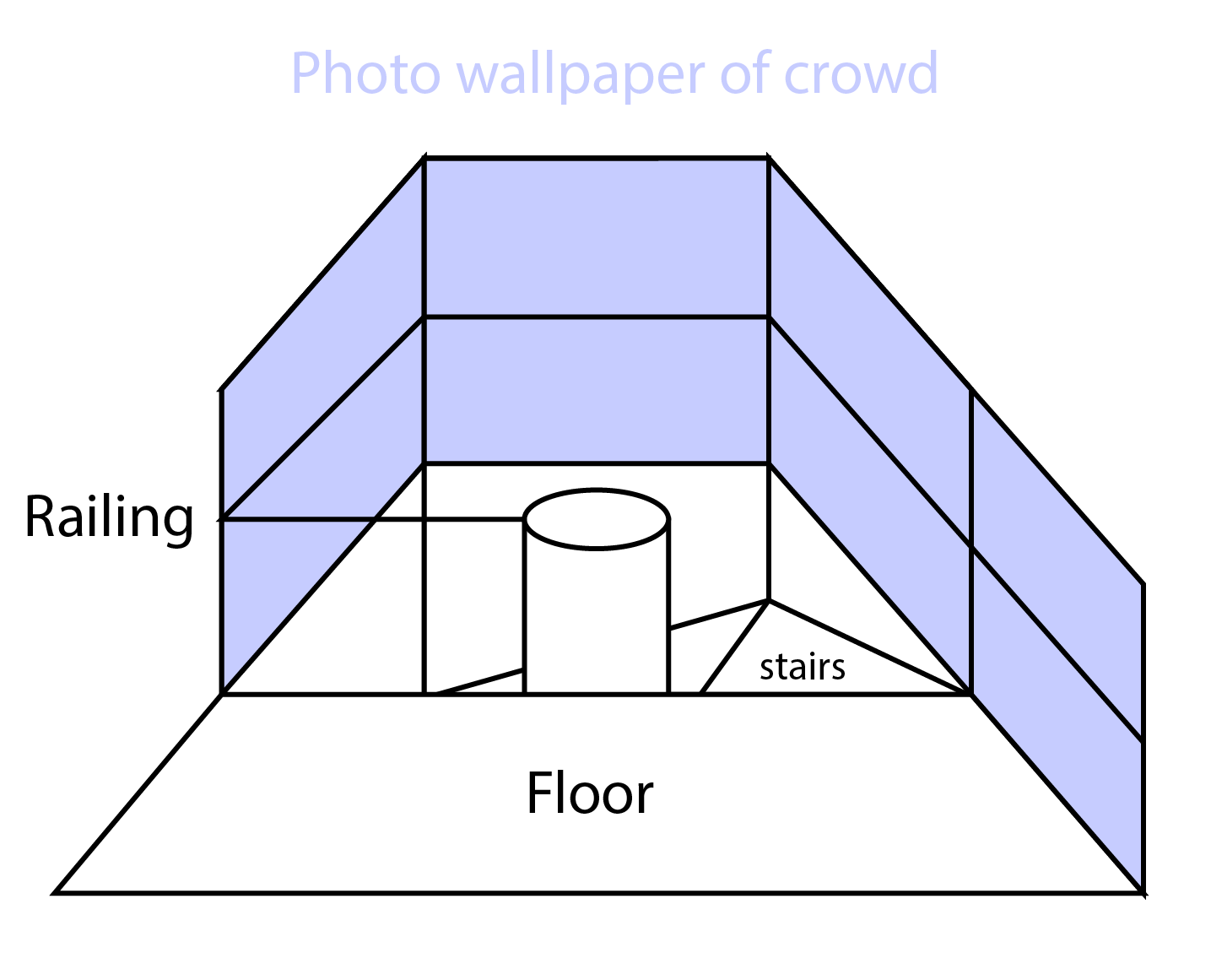 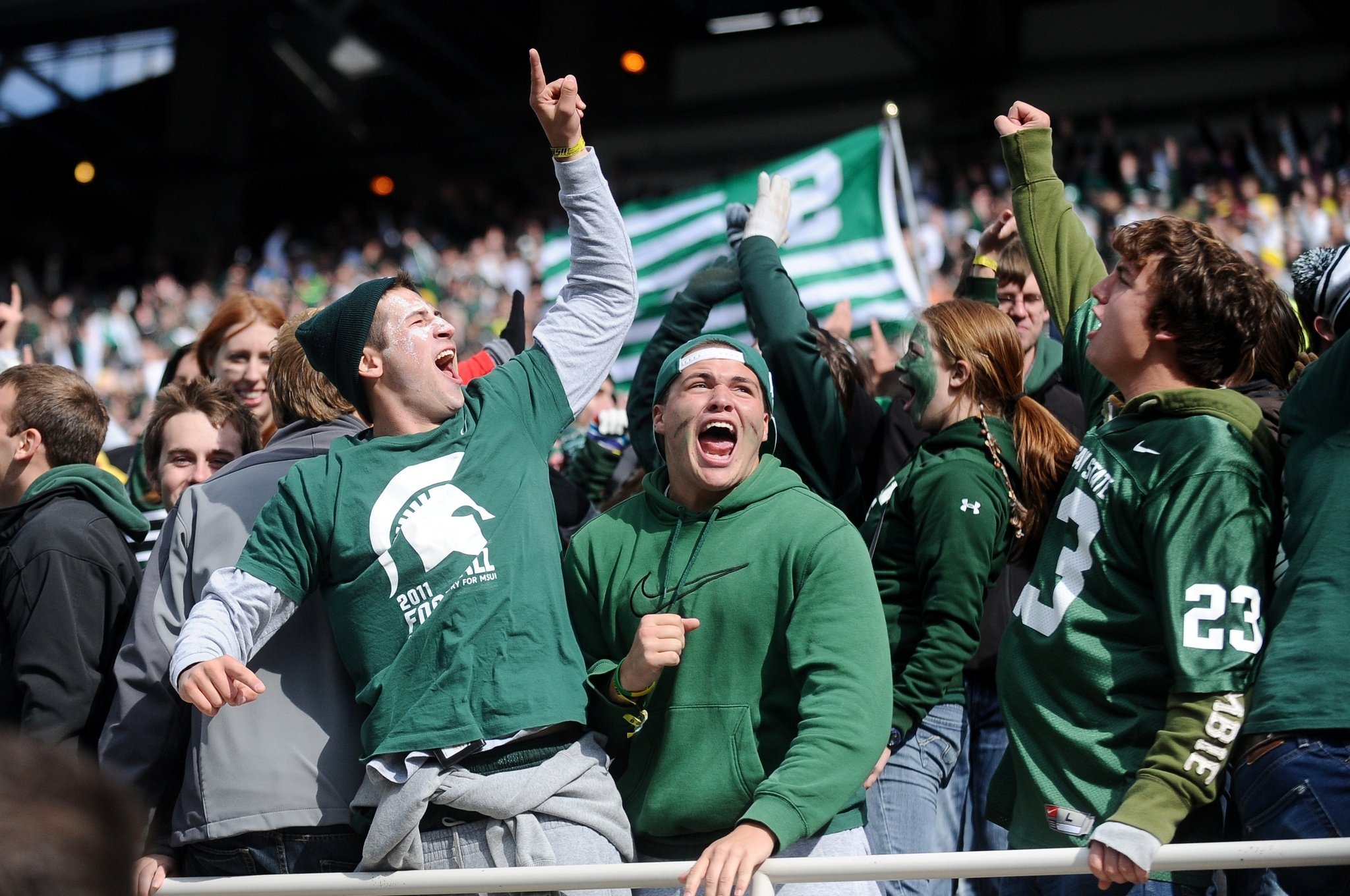 The idea was to use the railing of the stairs as the stadium railing. It's complicated to do but would be really cool.

In the next and final part of this blog series, you will see the photos of our office. The end result of our journey in creating the world's best office!